Report on the 140th Ordinary General Meeting of Shareholders

At the 140th Ordinary General Meeting of Shareholders, held on June 24, 2016, important matters were reported and resolved as follows. 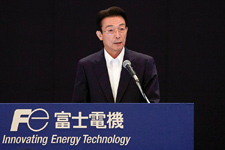 The following 9 directors were appointed in accordance with the Company’s original proposal:

Further, Motoyuki Suzuki, Toshihito Tanba, and Naoomi Tachikawa are all outside directors in accordance with article 2-15 of the Companies Act of Japan.

The following 5 auditors were appointed in accordance with the Company’s original proposal: