Electromagnetic noise (hereafter, “noise”) refers to unintended voltages/currents and electromagnetic waves generated by electric and electronic devices, which may affect other electric and electronic devices, causing malfunction and failure.
Our core products are power electronics equipment such as inverters and uninterruptible power systems (UPSs), which use switching turning voltage or current on/off of power semiconductors to control electric power. But rapid changes in the voltage/current generated during switching are thought to cause noise.
Generally, software simulation allows causes of problems in the design to be identified in advance and reduces the need to re-do tests with the actual machine (reworking). However, because noise may be propagated over area through the product componetnts, peripheral devices and spaces, it was believed that simulation could not be applied to antinoise measures. Nevertheless, Fuji Electric has used its proprietary technology to develop simulation technology for dealing with noise, achieving shorter product development periods. 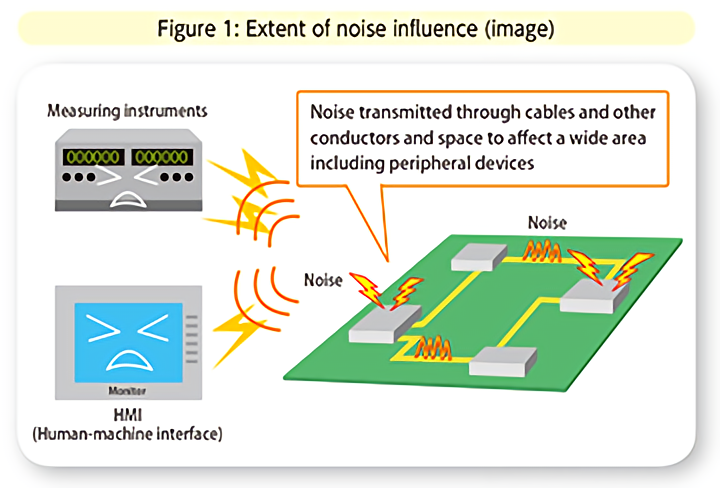 Building a simulation model that covers product components and structure

We develop a variety of products in-house, including power electronics equipment such as inverters and UPSs, the power semiconductors they use, measuring instruments, and controlboards. This allowed us to make use of the internal data and design expertise we have accumulated to become the first in the industry to realize noise simulation for power electronics equipment by using software to accurately reproduce elements not shown on circuit diagrams, such as the structures of components and devices. For example, we have modeled motors and inverters according to the type and also modeled cables with consideration for their internal structure. (See Figure 2.)
This technology was first applied to the inverter for use in air conditioning and water treatment systems (FRENICHVAC/ AQUA) that were released in 2012. We continued to make further improvements, which have been utilized for subsequent product development. Employing this technology has reduced the development period of the inverter by 45% as compared with before the application. 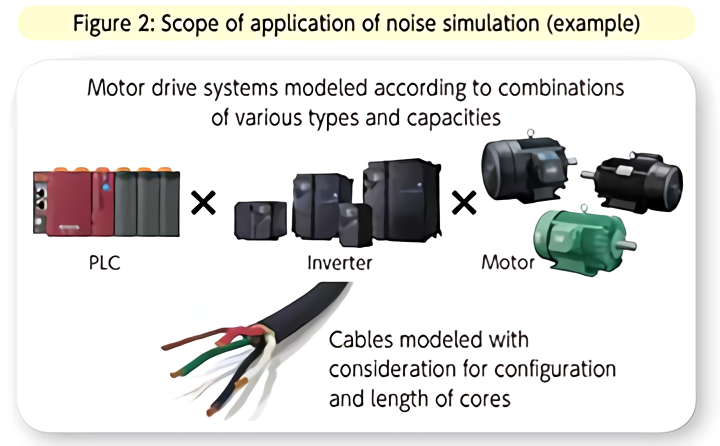 While our strategy is set as reinforcing the solutions business by using systems, it is assumed that combining multiple components will make noise infl uence more likely. We are expanding the scope of application of this simulation technology from combining components (device confi guration) to the operating environment, such as grounding installation. We intend to continuously contribute to the expansion of the systems business in the future by using this simulation as a fundamental technology to improve system reliability. 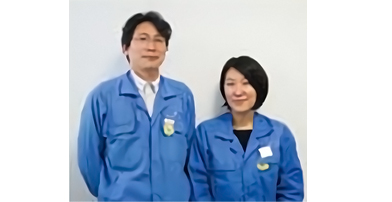