On July 1, 2020, the Tokaido Shinkansen N700S started commercial operation after undergoing a full model change for the first time in 13 years. Each seat is equipped with a mobile power outlet where passengers can charge their smartphone and other devices while each car has a large LCD that shows information such as the train’s current position and destination. The legroom in the Green Car (First Class Car) has been increased by 15%.

The aim of the Shinkansen is to carry passengers to their destination in a shorter time with greater safety and comfort. In recent years, effort has also been made to reduce power consumption to prevent global warming. N700S can run on less than half the power consumption* when compared with the 0 Series, the first generation of Shinkansen.

*When traveling at 220 km/h, which is the top speed of the 0 Series

Fuji Electric has contributed to saving energy and achieving a safe and comfortable ride quality through the use of “power electronics” that provide optimal control of electricity during the history of the Shinkansen, which spans over half a century. We are contributing to achieving SDG 9 and 11.

The “main converter inverter” is the heart of the Shinkansen

Power electronics is a technology that provides optimal control of electricity. It is used in many places that require electricity such as factories, railroads, vehicles and household appliances, and assumes the role of changing the type of electricity (AC and DC) and its level (current and voltage) depending on the application.

Power electronics has served in mainly two areas during the evolution of the Shinkansen. It contributes to saving energy and creating a comfortable ride. What has achieved these factors is the “main converter inverter,” which is often referred to as the heart of the Shinkansen. This unit converts electricity taken from the pantograph and optimally controls the motor that drives the Shinkansen.

The main converter inverters, placed below the floor of the Shinkansen, optimally control the motors

”Power semiconductors” that determine the performance of the main converter inverter

Power semiconductors change voltage and frequency by switching (ON and OFF) electricity finely and repeatedly at high speed. This enables the main converter inverter to have precise control over the rotational speed of the motor.

How to reduce power loss caused by switching is a challenge in the development of power semiconductors. This is because it is directly connected to saving energy at the main converter inverter. Furthermore, the power loss is converted into heat, which affects power semiconductor devices (chips) and their surrounding part, including electric circuits, and it is critical to provide a countermeasure for this in terms of quality.

Power semiconductors are created by forming precise electronic circuits on thin disc-shaped wafers. Slicing the wafer into squares of a few millimeters will create chips, and these chips are then connected by wiring and packaged with resin to create a module. They are integrated into the main converter inverter in the form of a module.

To reduce power loss, a method is available in which chips are processed to ensure they are thin and the distance of electricity flow is shortened. However, because the wafer material is hard and brittle, the wafers will crack during the manufacturing process when further reducing the thickness. 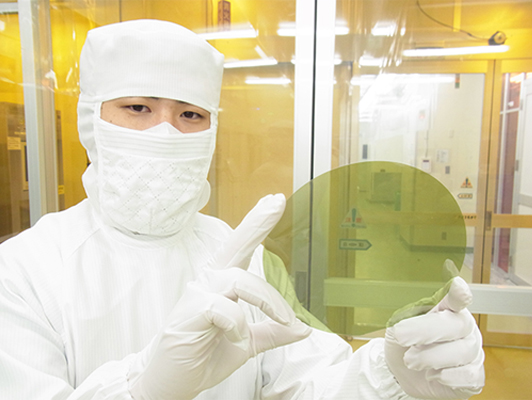 With this in mind, Fuji Electric has developed a unique processing technology. By minimizing the impact placed on the wafer, we have been able to produce thin chips and thus reduce power loss. We have also created package technology that can efficiently cool both surfaces of the chip heated by switching to reduce heat generation.

Generally, it is necessary to enlarge power semiconductors to enable even more electricity to flow (to increase the output). However, this technological innovation has enabled modules to increase the output (improved power density) while keeping the size. The power density of power semiconductors used on the latest N700S Shinkansen is approximately twice that of those equipped on the first Nozomi 300 Series that started operation in 1992.

■The change in the main converter inverter 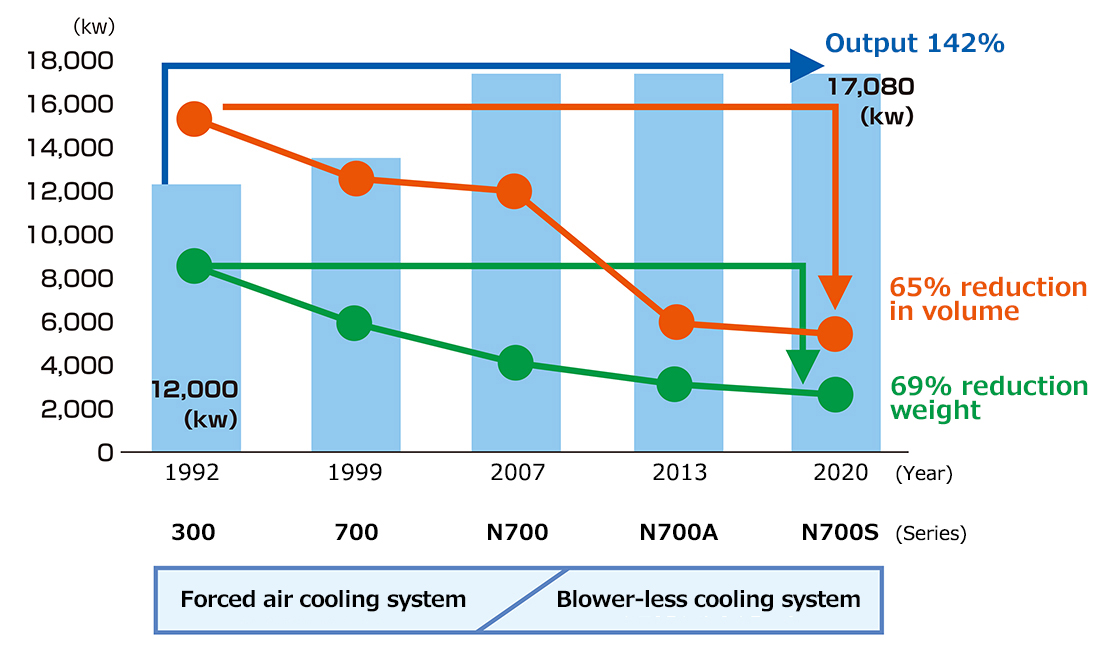 When talking about Fuji Electric’s power electronics, a crucial factor is control technology, which works in tandem with power semiconductors. One type of control technology is “vector control,” which is used on the main converter inverter.
The train begins to move slowly and gradually accelerates, and then runs according to how slippery the rail line is due to rain or other similar events. This is achieved by detecting the situation from such factors as the strength of the electric current flowing to the motor and by instantaneously updating the motor control with this information.

The latest N700S train also uses Fuji Electric’s control technology for its vibration control system. Previously, a method to absorb lateral vibration with damper hydraulics was used. However, a “fully active damping control system” was used in combination with a hydraulic pump on the N700S. Any vibrations not fully absorbed by the hydraulics are compensated by the pump pressure to negate the sway of the train, thus enabling the train to stable run with minimum lateral vibration more than ever before. Fuji Electric provides the drive system that controls the pumps, contributing to a safer and more comfortable ride. 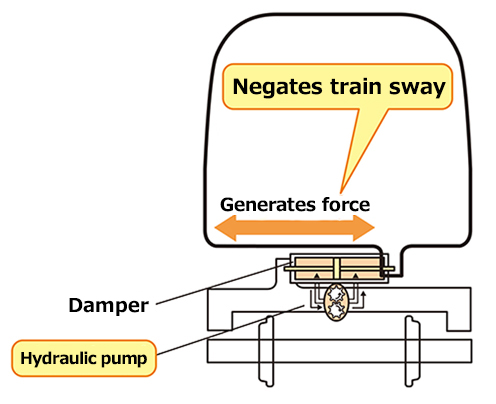 Since the opening of the Tokaido Shinkansen in 1964, Fuji Electric Shinkansen project members from the Sales, Engineering and Manufacturing Departments in addition to the Design Department have been working to overcome any issues as a team across the boundaries of departments and the workplace.

All of our staff involved in products came together with the customer when actually running the prototype train and checking its performance. They always verified any problems on-site and took immediate measures when there were any issues. If there were any faults with products, they gave top priority to quality and carried out a thorough investigation of the cause. The project logo mark used for the N700A

To increase the unity of project members in the company’s six departments scattered throughout factories and offices, a logo mark designed with six stars was created and made into a badge for these members to wear at all times. This badge emphasizes the strong desire of the members to provide the customer with quality that exceeds five stars.

Fuji Electric advocates creating teams of diverse human resources and facing challenges using the overall capabilities of these teams in our Management Policies. Our company members, along with the customer, will continue to hone their skills developed so far and contribute to achieving a sustainable society working together as a team by manufacturing from the perspective of the customer.