The Great East Japan Earthquake sparked a rise in demand for radiation measurement systems.
Aiming to meet this demand, the Company developed a silicon semiconductor detector that features greatly improved radiation sensitivity and a dosimeter that employs this detector.  This dosimeter can simultaneously measure accumulative exposure over a given period of time and rates of exposure over specific increments of time. This convenient portable device is the first dosimeter in Japan to feature such functionality.
We also developed a system for measuring radiation in food.
By placing this easy-to-use system in cardboard boxes or other packaging together with food, it enables the food's exposure to radiation to be monitored continuously. It can also determine whether or not food items are below the mandated exposure limits in only 12 seconds. 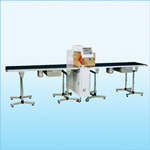 Plans to develop large-scale solar power generation facilities are in progress around the world, as these so-called mega solar power generation systems are a viable source of renewable energy.
To assist these efforts, the Company developed a series of power conditioners that feature superior efficiency and high capacities, perfect for use in mega solar power generation systems. As one conditioner in this series can realize capacity of 1,000 kW, systems can be constructed using fewer conditioners. Furthermore, by employing Fuji Electric's 3-level converters, which utilize proprietary technologies, these power conditioners are able to operate with world-leading efficiency -98.5%- and minimal energy loss. By packaging these items with components that provide basic functions, such as switchgears and transformers, we have also succeeded in reducing installation and assembly times.
* As of April 2012, based on Company data

In Asian countries experiencing significant growth, such as India and the ASEAN nations, power supply cannot keep up with the expansion of air conditioning and water treatment infrastructure, so efforts to save energy through inverter control of fans and pumps are progressing rapidly.
The Company has developed inverters for use in air conditioning and water treatment systems that are resistant to both dust and water and come standard equipped with specialized functionality.
A slim design allows the units to be mounted against a wall, like mainstream products sold in Asian and European markets. Moreover, the standard features of these units include a number of functions vital to the operation of fans and pumps in air conditioning equipment and water supply and drainage facilities, such as input interface for temperature sensors and controllers.

Initiatives to become more environmentally friendly in the fields of IT and new energy, among others, are focusing attention on power semiconductors with efficient power conversion.
Among the principal devices used for power conversion in semiconductors are metal-oxide- semiconductor field-effect transistors (MOSFETs). Fuji Electric has successfully developed the Super J-MOS series of MOSFETs featuring industry-leading levels of loss reduction as well as its newly developed superjunction (SJ) structure, which achieves low on-resistance performance.These devices realize a 14% reduction in electricity usage when compared to conventional Fuji Electric products.

Vending machines have been installed in various locations due to the convenience they provide in allowing people to purchase beverages and other items with ease. However, as the drive for electricity saving gains momentum, there has been a rising need to reduce the amount of energy used by these machines.
In light of this trend, we have developed ultra-energy-efficient vending machines that employ a hybrid heat pump and a new cooling system. The heat pump is used to cycle heat between the machine and the atmosphere while the cooling system optimally controls the flow of coolant in response to temperature changes. Compared to vending machines released by Fuji Electric in fiscal 2011, these new machines realize a 40% reduction in electricity consumption.

Power semiconductors contribute to energy savings in a wide range of equipment, including industrial robots, data center servers, HEVs, and solar and wind power generation systems. These components also help make equipment smaller and lighter.
For use in such power semiconductors, Fuji Electric has developed modules that are made entirely of SiC modules and that can realize reductions in electricity consumption and size much greater than those achievable using conventional silicon modules. We have also developed power conditioners that employ these all-SiC modules.

●Unique Package Construction that Amplifies the Strengths of SiC

SiC features superior heat resistance and durability.
Aiming to utilize these characteristics to the greatest extent possible, Fuji Electric sought out the optimal package structure, arriving at its new SiC package structure.
Using copper pins to mount semiconductor chips to substrates, as opposed to aluminum wire, enables higher currents of electricity to be run through the semiconductor. This also makes the construction simpler, allowing for miniaturization. Furthermore, heat-resistant epoxy resin is used for the casing for the module, rather than conventional silicone gel, contributing to better responsiveness under high temperatures and improved reliability. ●Electricity Use and Size Reduction Through All-SiC Modules

The Company's first module made entirely of SiC components was developed by mounting SiC-MOSFETs and SiC-SBDs on packages featuring the new construction design. This module realizes substantial reductions in electricity use.
For testing purposes, we equipped a power conditioner meant to be used in a solar power generation system with this module. This combination led to 75% reduction in energy when compared to standard household- use models. In addition, the resulting equipment was also only one-fourth the size of conventional equipment, representing a significant decrease in size.
Going forward, we will employ this new module in our inverters, UPSs, and other power electronics in order to further contribute to the realization of energy savings throughout society.

A Message from the Developers

The development of this all-SiC module and the power conditioner has allowed us to establish a new technological foundation that will be an invaluable asset in developing future SiC module-equipped power electronics.
This success can be attributed to the collaboration between engineers in the fields of power semiconductors and power electronics. Needless to say, it was important to verify whether or not the SiC module would be able to leverage its unique characteristics as predicted when incorporated into larger pieces of equipment. We therefore conducted comprehensive verification testing of how equipment functions when equipped with the modules, scrutinizing every aspect of the equipment, right down to its circuit boards and noise filters.
Based on the results of these tests, we developed a prototype power conditioner for use in solar power generation systems. The design process for this prototype led to the development of the all-SiC module utilizing the new package construction.
The development of this SiC module was an arduous process, but we will continue to advance development efforts with the aim of getting this module as well as equipment containing the module to market as soon as possible.